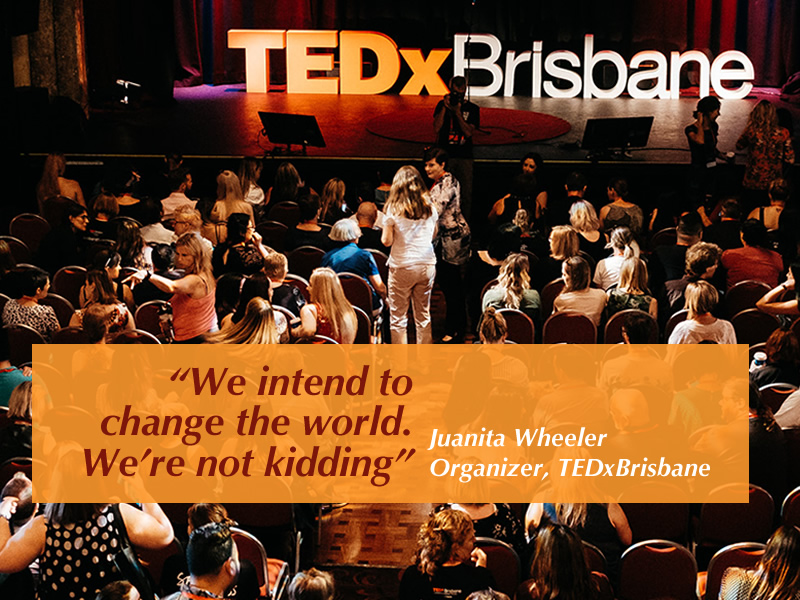 The Hack:
Write all the attendees the day after the event.

When Juanita Wheeler, Organizer of TEDxBrisbane, attended TEDxSouthBankWomen in 2012, she was at a crossroads. She was a director of global marketing for a multinational corporation, but she had fallen out of love with her work. She wanted to do something bigger, something more important, and something that would change the world. Enter TEDxBrisbane. Now, in 2018, Juanita is a full-time organizer and has enlisted her entire family to help.

Let's back up. This started in 2012, then in 2013, she became a TEDx Advocate, in 2014 she was a TEDx speaker when the event was branded as TEDxSouthBank.

Since 2015 her family fills critical spots. She's the Executive in charge of Curation, her husband Rob is the head of the production, and she has three kids, 24, 20 and 19 one is the experience manager, one is the greenroom manager, and one is the backstage manager in charge of the technical production. That's a lot of TEDx. I think they only have to go into the Living Room to have team meetings.

There is so much richness in this episode, and it was kind of Juanita to say that the entire family listens to this podcast and gleans a lot of information every week. Thanks. Now that we have this conversation on record, she's added to the richness of several fundamental concepts you'll want to note.

She's written a great article called 11 Things I wish I knew before my first TEDx.

She has excellent advice for potential TEDx speakers. We're going to use this in the future.

Juanita shared a few of the episodes of the show that have been helpful, Hannu's talk about pre-mortems, Ingrid's tip to use Basecamp, Craig's insight on running a green room, Gavin's deep dive on what it takes to scribe an event and Arthur Zards treatise on Adventures. What are your favorites?

The TEDxBrisbane Advocate program is a fantastic innovation. Each attendee is assigned an advocate, 10-12 attendees per person. The advocate contacts their people and ask;
- What are you looking forward to?
- Makes sure they're settled in on the day of and have everything they need.
- Helps to introduce them to other attendees, based on their interests
- follows up with them after the event to find out which of the speaker's ideas or initiatives do they want to follow up and do something about.

Juanita is also passionate about making a difference and uses the term Engineering Impact to create an internal meme she repeats endlessly to partners, volunteers, team members and the community. They want to be sure everything they do engineers impact in some form or another.

As an organizer who works closely with family ourselves, we applaud the commitment the Wheelers have made to their community, and we'll be taking many of the ideas she's shared to heart, as should you.

We intend to change the world. We’re not kidding.”TEDxBrisbane - Juanita Wheeler, Organizer