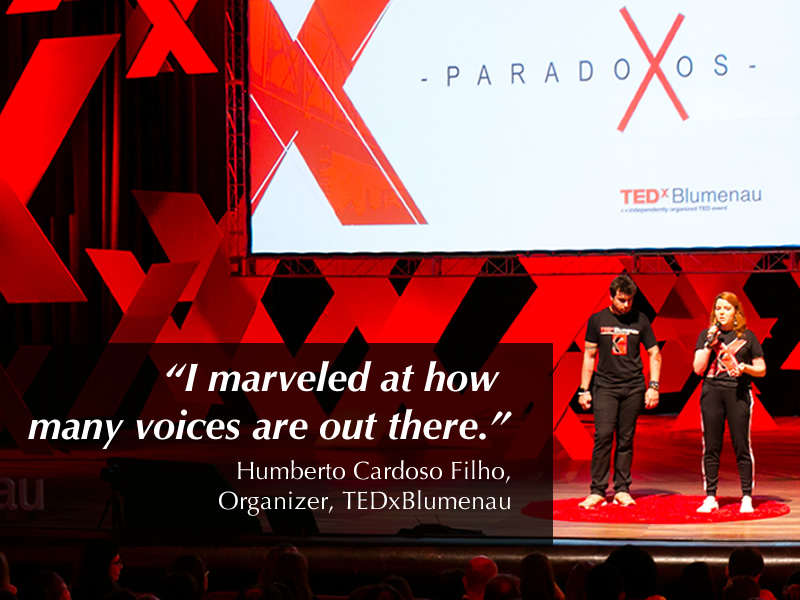 The Hack:
Host a workshop for your partners, to show them how to get the most out of their sponsorship

Humberto Cardoso Filho is the organizer for TEDxBlumenau, located in the southern part of Brazil, near the coast. He and his team have produced 11 main events and 7 Salons, all under 100 people. He recently attended TEDfest, so the population limit was removed for the event held in March 2018 which had 300 attendees. They're going to take it slow as they expand, especially into a new venue. Blumenau is a city of 400,000, with a vibrant TEDx community that has been developed strategically to keep everyone engaged by using Salons to focus on relevant themes.

"We find the conversations our city needs to have." This explains what Humberto believes makes their event compelling. Blumenau is a center for fashion in Brazil, and they've seen how fashion can be used as a tool for social transformation. They addressed several topics, including Intimacy, which sounds like it was fascinating for a Salon to focus on.

Humberto says that their coaching process takes six months and is a significant difference between TEDx and other local events. Their speakers are very prepared and the entire six months is broken down into a detailed timeline.

About his hack, he suggests that a workshop is held for sponsors to bring them into the event and show how they might help make an impact. Note: I've not heard this before, we're going to replicate.

I’ve marveled at how many voices are out there.” TEDxBluemenau - Organizer, Humberto Cardoso Filho