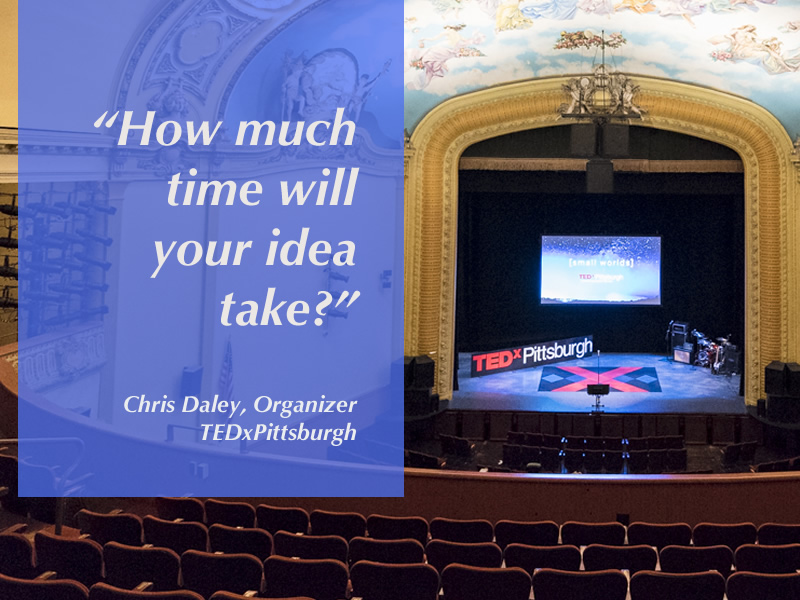 The Hack:
Personal attention is the best thing that doesn't cost money, just your time.

Chris Daley is the Organizer of TEDxPittsburgh and is part of a regional TEDx ecosystem with ten events within a short distance. Pittsburgh is a large region, but a small city, so the challenge of colliding events and keeping an identity for each TEDx is something Chris and his team think about.

He started as an attendee when the event was called TEDxGrandViewAvenue, then volunteered, became a part of the core team and in 2015 took over the lead organizer role. His background is in marketing, so he has a strong skill set which helps him produce the event.

"We want to be ambassadors for the City. It's the part of the story that motivates us."

Chris talks about the need for two teams and something that they're experimenting with this year. One team works on the event and passes the project over to a second team that manages the after-event tasks, videos, promotion, planning so that the first time can catch their breath. We all know how much of a sprint it is to get a TEDx produced and this strategy seems like a smart way to go.

Chris also shares his team's strategy for finding speakers in this episode. We know how hard that can be, especially with an event that continues year after year. He suggests that you get out in the community and participate in local activities. Live music, Moth sessions, spoken word festivals and jams of all sorts.

Chris also said that they're transitioning to 12-minute talks, down from the typical 18. Note: The guidance from TEDx in NYC is that video viewership drops precipitously after 12 minutes (my words). Good to know.

Chris and his wife share duties with their TEDx as she helps with the speakers.

Look closely at the stage in the image above. Notice anything unusual? If you do, put a note in the comments.

How much time will your idea take? Chris Daley, TEDxPittsburgh Organizer