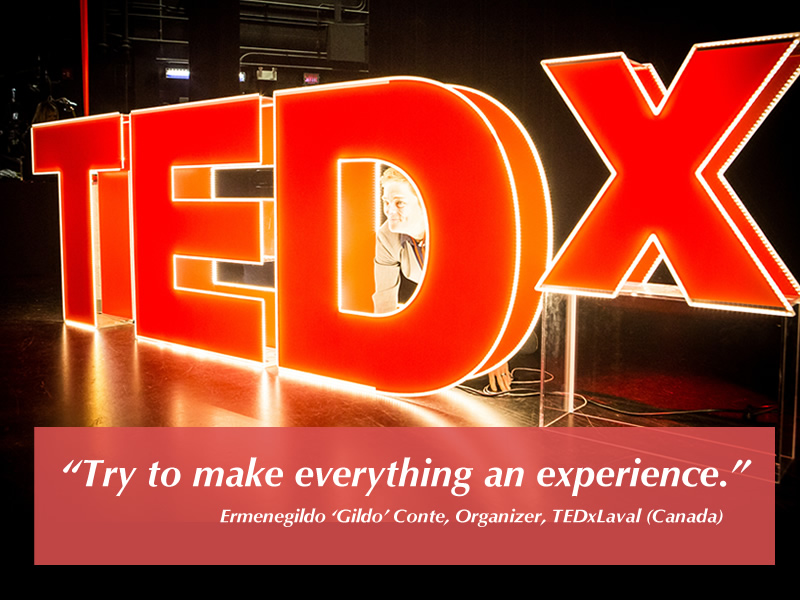 The Hack:
Stick to the essentials. Get rid of everything else.

Gildo Conte is the Organizer of TEDxLaval, located on an island next to Montreal, in Quebec, Canada. His passion and energy are infectious, and I bet it's great fun being a part of his small, five-person team.

His first brush with TED was when his kids said, "Dad, do you know about TED?" He says that it was a magical moment for him. He's purposely kept the event small, 150-250 people with nine speakers in an evening event. I love that he serves cocktails before the show.

His biggest surprise was that the reach of the event in just two years has been remarkable. Gildo says that there has been a good reaction from outside the region. His biggest challenge is that the French community of Laval doesn't know about TED or TEDx. We've heard this often from other Organizers, and it doesn't appear to be isolated to any given region. As much as we think everyone's heard about TED, the reality, is they've not.

In 2018 they've managed to produce four Salons, plus a Youth event. Remember, this is with a team of 5. That's impressive.

The video, just below, is the original promo that Gildo mentions in the episode.

The best-kept secret is to keep a small team Gildo Conte, TEDxLaval, Organizer