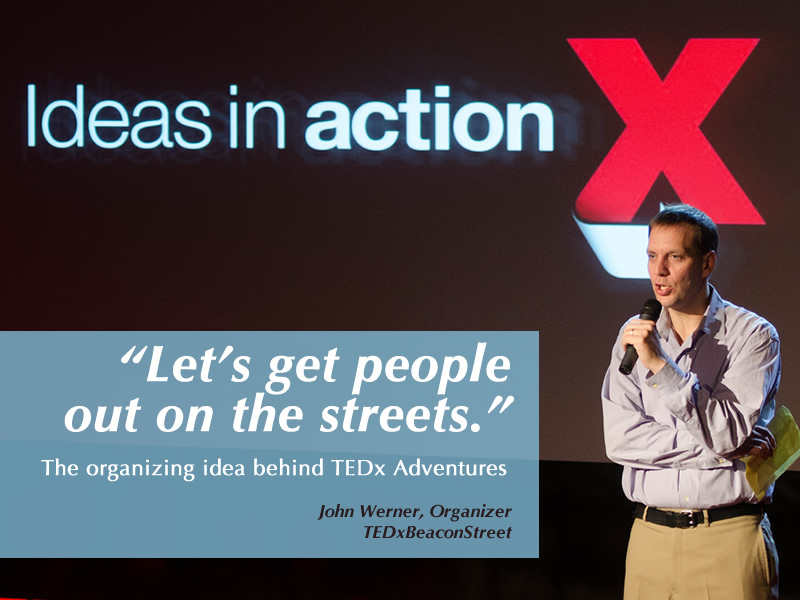 The Hack:
Find an architectural design firm who will take on your set design as a pro-bono project.

John Werner is the Organizer of TEDxBeaconStreet, one of the top TEDx events that other Organizers would love to visit. In this episode, you'll learn why John and his event have been so successful, with over 86 million views of their Talks since 2010. John's very generous towards everyone that has helped him build a staggeringly connected community.

John's been producing TEDx events since 2010 (Starting with TEDxBoston) and is deeply integrated into the TEDx Community. He's on the TEDx Board of Advisors, was the original creator of TEDx Adventures with over 365 to date, and over 10,000 attendees each year. He's a part of the TED-Ed brain trust, and you'll learn about his deep passion for education which comes across loud and clear in this episode.

John is also a TED speaker, having presented at multiple TEDx events, TED University, TED-Ed, and TED Global. He also nominates TED Fellows. His career and experiences are vast as evidenced by an extensive list of accomplishments, Fellowships, and Awards on his Wikipedia page. John's certainly a role model.

This episode covers so much ground that you don't want to read about it, you want to listen. Hear John's passion, deep thinking behind making connections and how he let's just enough chaos into the system to make it all work. One might also say that John is a Photographer masquerading as an Entrepreneur, TEDx Organizer, and Community Innovator. Look at his stunning images here, from around the world. Very inspiring.

Knowing this is one of the TED'xs most Organizers want to visit, check out their upcoming events here.

Note: The image above is TEDx Organizers at a Beacon Street event wearing the Red Sweatshirt that John talks about in this episode.

Let's get people out on the streets John Werner, Organizer, TEDxBeaconStreet